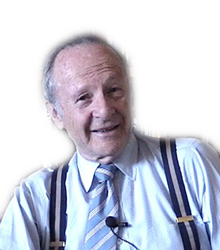 Matthew Meselson, geneticist and molecular biologist, is interviewed by Mila Pollock at Harvard University in Cambridge, Massachusetts, on July 17, 2002.

Matt Meselson talks about his scientific pursuits as a youth, his undergraduate years at the University of Chicago and Caltech, and his work with Linus Pauling as a graduate student in chemistry at Caltech in the early 1950s, including his work on density gradient centrifugation. He recounts how his auspicious relationship with Jim Watson began at Caltech, and how it led him to Woods Hole in 1954 and Frank Stahl with whom he collaborated on their eventually famous DNA replication experiment. Meselson reminisces about Jim Watson at Harvard in the 1960s, the exciting changes he brought about in biology at Harvard, and Watson as a writer. He speaks about the unique early phage meetings at Cold Spring Harbor Laboratory, John Cairns as a friend and as director of Cold Spring Harbor Laboratory. And finally, Meselson shares his thoughts on scientific education and research as it exists today.

Interview recorded on Hi-8, then transferred to DVD.