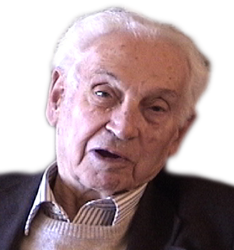 Ernst Mayr, the leading evolutionary biologist of the twentieth century, is interviewed by Mila Pollock and Jan Witkowski in Bedford, Massachusetts, on March 31, 2002.

Ernst Mayr (July 5, 1904-February 3, 2005) has been universally acknowledged as the leading evolutionary biologist of the twentieth century. He earned his Ph.D. in ornithology at the age of 21 from the University of Berlin in 1926. During his tenure at the Berlin Museum, from 1926 to 1930, Mayr led ornithological expeditions to Dutch New Guinea and German Mandated New Guinea. In 1931, he was hired by the American Museum of Natural History, Department of Ornithology. During his 20-year AMNH tenure, Dr. Mayr described 26 new bird species and 410 subspecies, more than any other living avian systematist. In 1953, Mayr became Alexander Agassiz Professor of Zoology at Harvard University's Museum of Comparative Zoology, and served as Director of the Museum (1961-1970). He has published hundreds of papers and eight books, including Systematics and the Origin of Species (1942), which became a landmark of evolutionary biology. Mayr has been honored with more than 25 major scientific awards and honors and many honorary degrees, including the National Medal of Science (1970), the Balzan Prize in Biology (1983) and the Crafoord Prize of the Royal Swedish Academy of Sciences (1999) with John Maynard Smith and George C. Williams "for their fundamental contributions to the conceptual development of evolutionary biology." In 1995, Harvard’s Library of the Museum of Comparative Zoology was rededicated as the Ernst Mayr Library of the Museum of Comparative Zoology. Mayr was a longtime friend and mentor to Jim Watson.