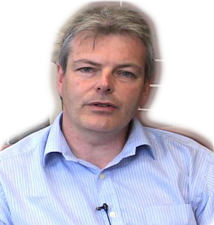 Educated at the University of Cambridge (M.A. in biochemistry) and the University of Oxford (Ph. D.), Dr. Bentley was a postdoctoral fellow, lecturer, and senior lecturer at Guy's and St. Thomas's Hospital in London from 1991 to 1993 where he studied mutations that cause genetic diseases, and a Senior Lecturer in the Division of Medical & Molecular Genetics at the University of London.

In 1993 he was brought to Sanger Centre (now known as Wellcome Trust Sanger Institute) as a founding member and head of human genetics by his mentor, John Sulston. Dr. Bentley led Sanger in their major contributions to the Human Genome Project, The Single Nucleotide Polymorphisms (SNP) Consortium, and the International Haplotype Mapping (HapMap) Project. Dr. Bentley left Wellcome in 1985 to join commercial sequencer, Solexa, Inc., as Chief Scientist where he was responsible for the Company’s DNA sequencing applications development and projects. Solexa was acquired by Illumina in 2007.

Interview recorded on Mini DV, then transferred to DVD.